On World Diabetes Day, a story from Buburi 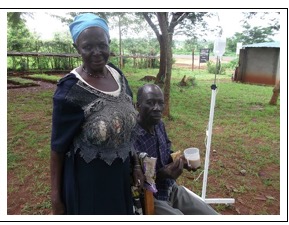 Diabetes has been described by those with the condition as living with an “unwanted friend”. It is a life long disease suffered by millions around the world.

Caring for those with Diabetes in the UK is becoming a major problem for the NHS. The cost of medication, monitoring for complications and treating those complications is spiralling out of control due to an unprecedented increase in people diagnosed with the condition. However, people in the UK are very fortunate because they receive amazingly good care completely free of charge. Sadly, this is not the case in other parts of the world.

Despite the fact that most people living in and around the Buburi community in rural Western Kenya struggle to find enough to eat, there are many suffering from Diabetes. There is no NHS or free healthcare in Kenya and so the Buburi clinic helps to care for those living with the disease. On one occasion a middle aged man named Joseph was brought to the clinic, he was deeply unconscious and barely breathing. Initially the staff thought he had died but they worked fast to assess what the problem was – after checking his blood sugar it was found to be very low. A glucose drip was set up and by the time his wife arrived from their remote village he was sitting up enjoying a cup of tea. His wife was astounded. With tears in her eyes she thanked the clinic staff for raising him from the dead!

Joseph was lucky to have access to the Buburi clinic. Without their care he would almost certainly never have regained consciousness and would have died from hypoglycaemia. The clinic plays such a vital role providing essential health care for this impoverished community. It is literally a lifeline for hundreds of people, like Joseph, in desperate need of life saving care every day.